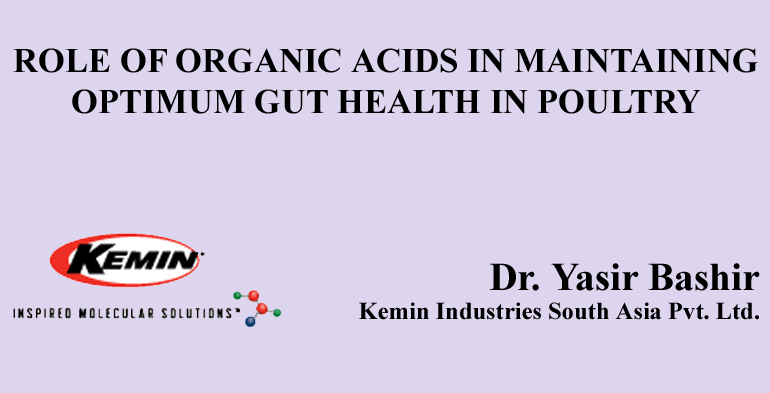 Yasir Bashir, Kemin Industries South Asia Pvt. Ltd.
INTRODUCTION:Feeding in poultry constitutes roughly about 75% of the total cost of production and represents a vital tool to exploit the genetic potential of bird, as it contains all the important nutrients to optimize bird’s growth and health. However, feed can potentially expose the gastrointestinal tract (GIT) or gut to certain pathogenic organisms like E. coli, Salmonella, etc.

To achieve optimum productivity and potential, the health condition of GIT is of paramount importance in poultry production. Therefore, different performance additives are incorporated to optimize the nutrient absorption and supplement the bird with balanced hygienic feed. A healthy GIT not only affects the feed digestion, nutrient absorption and metabolism, but also impacts on energy and protein utilization, immune response and diseases resistance. Providing birds with appropriate and hygienic feed free from potential pathogens is believed to have beneficial effects on their gut health, since inappropriate maintenance of gut health depresses immune system and productivity.

For maintaining optimal gut health and to mitigate the negative effects of feed borne pathogens which impact gut health, antibiotic growth promoters (AGP’s) are primarily used for many decades. However due to increased public awareness about the development of cross resistance of pathogens to antibiotics, poultry industry finds their way into replacing antibiotics with probiotics, prebiotics, essential oils, etc. But in recent times, a renewed focus is laid upon the use of organic acids in poultry feed to maintain optimum gut health, improve nutrient utilization and growth performance. They have been used for more than 50 years to reduce bacterial growth and mold in feedstuffs and thus preserve the hygienic quality of feed. However, due to their antimicrobial activity, organic acids and their salts not only help to preserve feed and silages, but also are effective in reducing bacterial content and maintaining the nutritional value of feed. This ensure animal performance as well as improving nutrient digestibility, which in turn leads to consistent animal health. Apart from improving feed hygiene, organic acids stabilize the gut microflora eubiosis and their effects on feed digestion and absorption which were demonstrated in number of studies. In animal husbandry, reduced feed conversion rates, improved daily weight gain and reduced incidence of diarrhea contribute to enhanced economic return through lower feed costs and reduced time to market weight. There are variety of methods of incorporating organic acids in animal feed, which can be applied directly into feedstuffs and compound feed: liquid acids and blends are sprayed onto the feed; or as solid acids and acid salts added directly or via special premixtures. Organic acids can also be included in drinking water.

Organic acids are generally considered to be any organic carboxylic acid with the general structure of R-COOH, and hence include fatty acids and amino acids. Organic acids are short chain acids (C1–C7) and are either simple monocarboxylic acids such as formic, acetic, propionic and butyric acids, or carboxylic acids bearing a hydroxyl group (usually on the α-carbon) such as lactic, malic, tartaric, and citric acids. These weak acids are added to the feed in sub-therapeutical dosage and are believed to have the capacity to improve growth performance, nutrient utilization, and health. In addition, as organic acids are partly dissociated, not all of them influence intestinal microflora. Most of the organic acids with antimicrobial activity have a pKa value between 3 and 5 values.

MODE OF ACTION
Postulated mode of action of organic acids is directly related to the ability to reduce intestinal pH, which is followed by alterations in intestinal ecosystem. The main objective of supplementing organic acids is to lower intestinal pH, with the intention of controlling microbial growth and colonization, resulting in lowering nutrient competition. Organic acids and their salts exhibit growth inhibiting effects on stomach and gut microbes through pH reduction and, anion & proton effects in microbial cell. Organic acids in undissociated (non-ionized, more lipophilic) state can enter through the semi permeable membrane of bacterial cell wall and enter cytoplasm. At the internal pH of bacteria (~7.0), the undissociated organic acid molecules dissociate, releasing protons(H+) and anions (A-). This leads to decrease in the internal pH of bacteria. The pH sensitive bacteria are unable to tolerate a large spread between the internal and external pH. A specific H+ - ATPase pump proceeds to bring the pH inside the bacteria to normal level. Lowering of pH also inhibits enzymes (e.g. decarboxylases and catalases), inhibit glycolysis, and prevent active protein synthesis by the bacteria. The anionic (A-) part of the acid trapped inside the bacterial cell, can diffuse freely through the cell wall in its non-dissociated form, becomes toxic by creating anionic imbalance to internal osmotic problems for bacteria. The difference in the antimicrobial spectrum of various organic acids can be attributed to the structure of outer membrane or cell wall of the organism. Since bacteria have a less complex structure in the wall than molds, lipophilic nature of organic acid like propionic acid facilitates easy entry than formic acid which can pass through bacterial cell and being more bacteriostatic than rest of organic acids. Consequently, varying sensitivity of the different classes of microorganism towards different organic acids necessitate the use of blends of organic acids and the salts to be more effective against a wider range of microbial species than single acids. In feed itself, organic acids act by reducing the pH thereby exerting antimicrobial effect as well as reducing the buffering capacity of feed which is a critical measure for effective enzyme activity and control of microbial proliferation.

The role of organic acids in poultry nutrition can be broadly categorized into four main heads:

1. EFFECT ON PERFORMANCE
It is a well-known fact in poultry nutrition that organic acids can serve as viable alternates to feed antibiotics and have certain growth promoting effect. Many workers reported that supplementation of single or a combination of organic acids improved growth performance, average daily gain and feed conversion in broilers. It was reported that combination of lactic acid, citric acid, ascorbic acid, propionic acid and benzoic acid in the diets have significant (P≤0.05) effect on growth performance improvement of broiler chickens. Better growth performance attributes to reduction in pathogenic bacterial colonization in GIT accompanied by reduced competition for nutrients between the host and exogenous pathogen microflora, and because of their direct antimicrobial effect, the reduction in buffering capacity in conjunction with improving nutrient digestibility.

2.EFFECT ON NUTRIENT UTILIZATION AND DIGESTIBILITY
Apart from facilitating and maintaining feed hygiene, organic acids have reported to be a viable alternative to improve nutrient utilization and digestibility. Dietary incorporation of organic acids like acetic acid, fumaric acid has been reported to increase both metabolizable energy (ME) and nutrient digestibility of crude protein (CP), ether extract and nitrogen free extract of broiler diets. Addition of 2 % citric acid in broiler diet increased the retention of dry matter, crude protein and neutral detergent fiber. This improvement in CP and ME digestibility attributed to reduction of microbial competition with host for nutrients, endogenous nitrogen losses and production of ammonia. Organic acids also led to elevated gastric proteolysis and improved the digestibility of protein and amino acids. Positive effect of organic acids on digestion was related to slower rate of ingesta passage into intestinal tract and better absorption of necessary nutrients. Organic acids cause lowering of pH of intestinal ingesta and thus boost the digestibility of protein. A decrease in intestinal acidity has a significant role with organic acids for not only reducing enteropathogenic bacteria colonization that are sensitive to acid pH, but also be favorable to stimulate the growth of beneficial bacteria like Lactobaccilli. The lesser number of those acid-intolerant microflora may indirectly stimulate nutrient digestibility improvement.

Dietary addition of organic acids in poultry diets can improve the digestibility of minerals and increase the utilization of phytate phosphorus. Supplementation of the mixture of organic acids in broiler diet caused an increase in digestibility and availability of nutrients (such as calcium and phosphorous). Due to developing desirable microflora (Lactobacillus spp.) of the digestive tract, it results in increasing mineral elements retention and bone mineralization. Dietary addition of fumaric acid resulted in improved balance of calcium and phosphorous by 14% and 13% respectively.

3. EFFECT ON GASTROINTESTINAL TRACT
Optimum intestinal health in poultry industry is of paramount significance to achieve target growth rates and optimum feed efficiency. Apart from the positive effect on growth performance and nutrient digestibility, organic acid supplementation has a favorable impact on gut histomorphology. It has been reported that dietary incorporation of organic acids significantly increases the villus width, height and area of duodenum, jejunum and ileum of broiler chicks. Organic acids lead to a decreased thickness of muscularis in all segments of small intestine. This helps in improving the digestion and absorption of nutrients, since the thickening of mucous layer on intestinal mucosa contributes to reduced digestive efficiency and nutrient absorption. Organic acids reduce intestinal colonization and infectious process, thereby, decreased inflammatory process at the intestinal mucosa which results in improved villus height and function of secretion, digestion and absorption of nutrients. The reduction of pathogenic organisms, which produce toxins that can disrupt the villi and crypt structure also helps to account for the improvement in intestinal gut structure. In addition to the effect on gut morphology, organic acids also have beneficial effect on gut microbial population. Sub-therapeutic doses of organic acids modulate the natural microbial population in the gut by decreasing the adhesion of bacteria such as: Escherichia coli, Campylobacter, Clostridium perfringens, Salmonella kedougou, and Salmonella gallinarum. Population of coliform bacteria in the gut of broiler chickens depressed significantly following organic acid (benzoic and fumaric acid) supplementation in their diets.

4. EFFECT ON IMMUNITY
Various studies have demonstrated that organic acids could help in the stimulation of natural immune response in poultry resulting in better antibody titers against infectious bursal disease (IBD) and newcastle disease (ND). This can be explained based on possibility of speeding up the differentiation of lymphoid organs by increasing the activity of hexose monophosphate pathway, thus increasing the circulating antibody. The significant increase of CD4 and TCR-II lymphocytes by addition of organic acid indicate the increase of lymphocyte to exogenous antigen and provokes immune response quickly. Also, it has been reported that birds fed with organic-acid diet had heavier immune organs (bursa of fabricius and thymus) and higher level of globulin in the serum. It has been suggested that improvement in bird immunity could be related to the inhibitory effects of organic acids on gut system pathogens and enhance the density of lymphocytes in lymphoid organs, improving non-specific immunity.

CONCLUSION
Thus, organic acid supplementation in poultry diets not only has a positive impact on feed hygiene by reducing pathogen load but also on the performance of birds. This impact is wide, ranging from overall improvement in productivity and immunity to gut health, both in terms of its morphology and microbial balance. As such organic acids can be considered as a viable and substantial alternate for AGP’s in poultry feed.