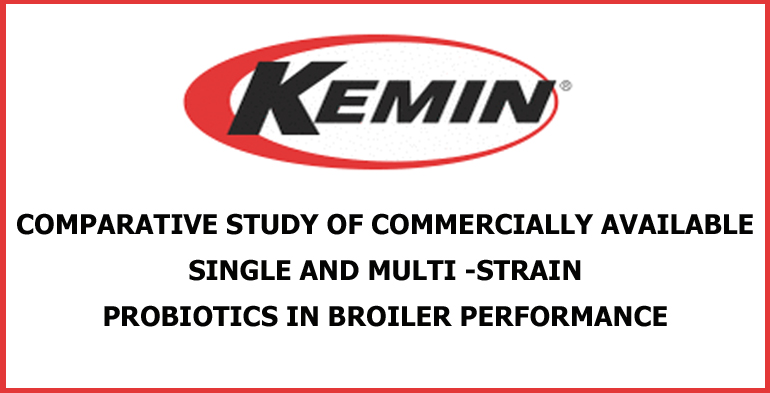 Necrotic enteritis (NE), an enterotoxemic disease caused by Clostridium perfringens, is a major threat for the economy of poultry farming. Predisposing factors influence the incidence and severity of NE induced by C. perfringens. The known predisposing factors for NE are high protein and high energy diet, coccidiosis infection, sudden change in quality of feed, hygiene and shed management, stocking density and immunosuppression. When it comes to the damage caused by NE in poultry farming, producers often adopt the figure of 0.05 USD per chick derived from 2 billion USD loss on a worldwide scale as estimated in 2000. Loss is not only associated with mortality but also with decrease in bird’s performance and feed efficiency particularly in subclinical case, thus true cost of NE became close to 6 billion USD.

Prevention and control of diseases have led to substantial increase in the use of antibiotics in feed. Concerns exist that the use of dietary antibiotics leads to the development of antibiotic resistance, posing a potential threat to human health and thus European Union issues a ban on the approval for dietary antibiotics as growth promotor in commercial animal production. Thus, effective alternative solutions to maintain gut health are explored continually. Studies demonstrated that the potential alternative feed additives to AGP include prebiotics, probiotics, essential oils, organic acids, different herbs and spices, and different dietary enzymes. Bacillus subtilis PB6, a potential probiotic, can effectively maintain the gut health by inhibiting the proliferation of Clostridium perfringens and favour the growth of beneficial bacteria. A commercial broiler study was conducted to compare the efficacy of Bacillus subtilis PB6 strain against single and multi-strain probiotics on broiler performance.

TRIAL DESIGN
A 35 days trial was done in Bangladesh with a total of 3,984 straight run Hubbard classic broiler birds. The birds were randomly divided into three treatment groups with 8 replicates of 166 birds per each replicate. The first, second and third groups were fed with regular corn-soya based pellet diet as per breed specification with MS at 0.5kg/MT, BS at 0.5kg/MT and Bacillus subtilis PB6 at 1kg/MT of feed respectively. The trial design and dosage details are given in Table-1. The birds were culled at 35 days of age and production parameters like feed intake (FI), body weight (BW), feed conversion ratio (FCR), livability percentage and European efficiency factor (EEF) were analyzed 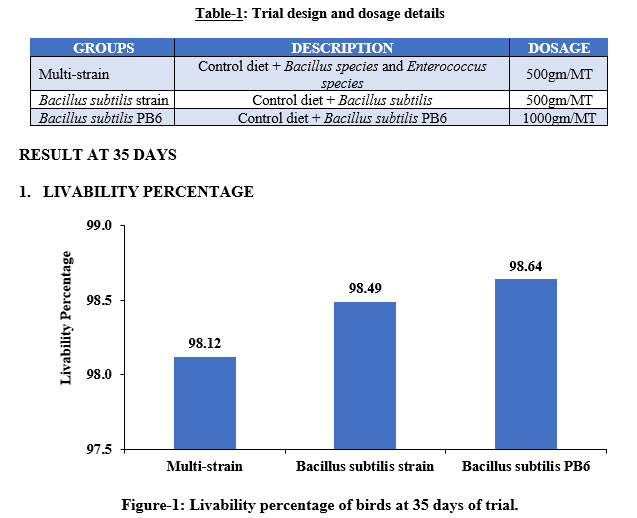 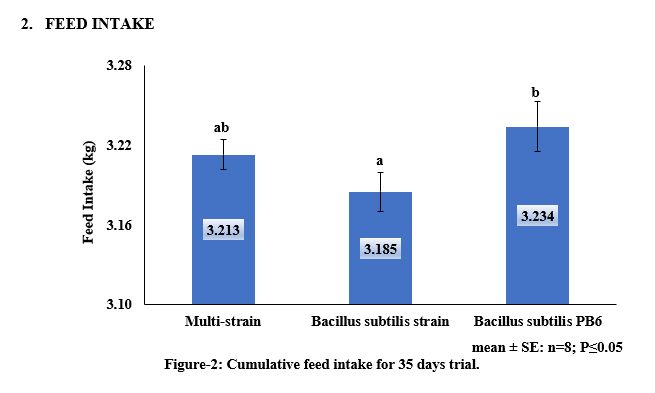 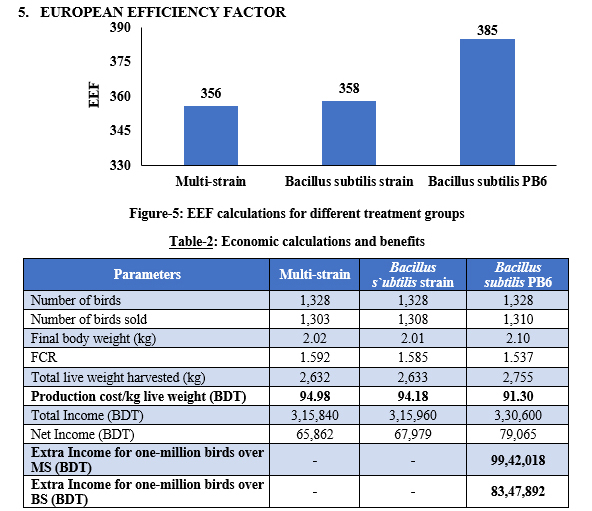 CONCLUSION
Based on this trial, addition of Bacillus subtilis PB6 had shown improvement in terms of higher body weight and better FCR when compared to other probiotics. The efficacy of probiotics is varied with the strain and species. Thus, the single strain probiotic containing Bacillus subtilis PB6 demonstrated better in terms of production performance of broiler birds with more economic returns.