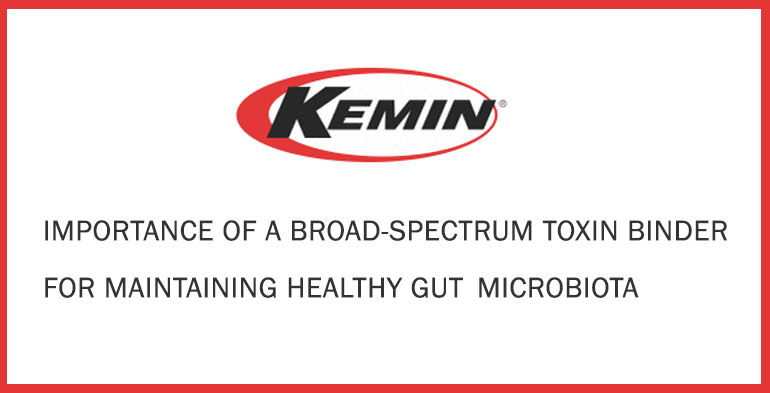 Introduction:
Profitability of poultry farming depends up on faster growth of the birds, breast meat yield, efficiency of feed conversion rates and lower mortality and morbidity rates for broilers, quality and quantity of egg production for layers. Plant based materials such as corn, soya, wheat bran, etc., are used as a major ingredient for animal feed preparation.

These ingredients are usually prone to toxigenic fungal attack, leading to contamination with single or multiple mycotoxins1. It has been proved by various studies that mycotoxins are having carcinogenic, estrogenic, immunotoxic, nephrotoxic, hepatotoxic and neurotoxic effects on animals and the effect is more pronounced, when multiple mycotoxins are present2,3,4. These effects can lead to a significant loss in profitability of poultry farming. Several researchers have investigated the mode of action of various mycotoxin and the pathways associated to pathogenesis1,4. In addition to the direct toxic effect on the host cells, some recent reports suggest that mycotoxins have a negative effect on beneficial gut microflora also5.

Role of gut microbiota on health status of the animals
The gastrointestinal (GI) tract of chickens harbor diverse and complex microbiota that plays a vital role in digestion and absorption of nutrients, immune system development and pathogen exclusion6. In addition to this, the integrity, functionality, and health of the chicken gut depends on many factors including the environment, feed, and the GI microbiota. It has been reported that gut microbial diversity can be improved by probiotics6. Probiotics are single or mixed cultures of live non-pathogenic microorganisms, when provided in adequate amount confers benefit to the host1. Probiotics currently being used are Bacillus subtilis, lactic acid bacteria (LAB), i.e., (L. bulgaricus, L. acidophilus, L. casei, L. lactis, L. salivarius, L. plantarum), Streptococcus thermophilus, Enterococcus faecium, E. faecalis, Bifidobacterium spp., fungal strains such as Aspergillus oryzae and yeast (Saccharomyces cerevisiae)7.Teo et al., have reported that broiler birds fed with B. subtilis (PB6) had heavier bursas and heterophils with higher in vitro phagoctyosis for Escherichia coli8. This indicates the role of B. subtilis (PB6) on chicken innate immune system possibly by supporting gut microflora8. Such findings indicate that the interactions between animal and gut microbiota is fundamental to poultry health and production6,9.

Interaction between mycotoxin and the gut microbiota: Bi-directional effect
Alteration in the GI gut microbiota is caused by non-infectious and infectious stressors6. The non-infectious factors include environmental stressors, nutritional imbalances, dietary changes, mycotoxins, poor management, enzymatic dysfunction, or host genetics6. Infectious factors include viral or bacterial challenge, coccidiosis, or toxic metabolites produced by harmful microorganisms such as Clostridium perfringens. Mycotoxins being a non-infectious stressor, have been demonstrated for modulation of gut microbiota composition6. Such alteration in gut microbiota can be observed up to species level in some of the studies. In another study, it was found that each mycotoxin has differential growth inhibiting effect on bacteria on exposure to mycotoxins (Table 1)10. In a study reported by Ali-Vehmas et al., mycotoxins slowed down the growth of microorganisms indicating the possibility of antimicrobial effect11. 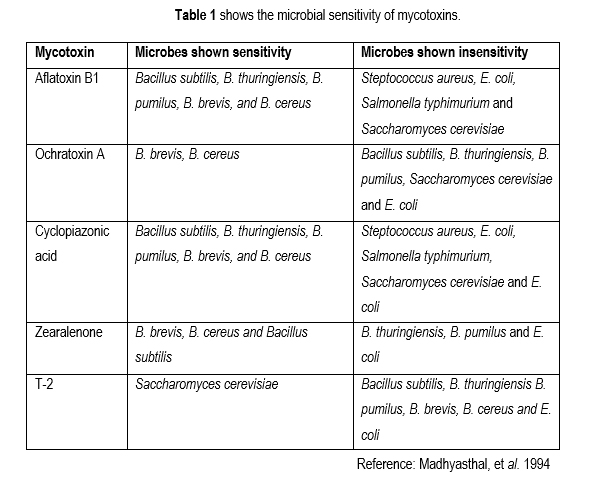 Beneficial bacteria such as B. subtilis and B. pumilis was found to be sensitive to aflatoxin B1 (AfB1), cyclopiazonic acid (CPA) and zearalenone (zea), whereas T-2 was sensitive to S. cerevisiae. Ochratoxin A (OTA) was sensitive to B. brevis and B.cereus. None of the tested mycotoxins were reported to be sensitive to E. coli and Salmonella10. Though mycotoxins shown sensitivity to the microbes, the extent of sensitivity depends on the concentration of mycotoxins and the environment it is exposed to. The reported effects of most of the mycotoxins are negative in terms of intestinal health accompanied by an increase of the gut pathogen2. Fumonisins (FB) are reported to have the ability to modify microbiota by modulation of mucus production5. In addition to this, alteration in composition of intestinal microbiota of ileum was also reported in broiler birds administered with FB for 15 days5. The alteration was primarily seen in reduction of beneficial bacteria such as Candidatus savagella and Lactobacillus. In contrary to this, microbes attack mycotoxins by either adsorption or biotransformation mode also and thus mitigates the toxic effects of mycotoxins2,5. Reports on gut microbiota eliminating mycotoxin from the host naturally also exists, provided that the host is healthy with a balance gut microbiota6. Such findings convey that, mycotoxins and microbes have bi-directional effect.

Occurrence of mycotoxins
United Nations Food and Agriculture Organization and the World Health Organization has estimated that 25% of the world’s crops such as nuts, cereals, and rice are contaminated by mold and fungal growth2. Mycotoxins are exposed mostly by ingestion followed by the dermal and inhalation routes2. Mycotoxin exposure is not only limited to pure mycotoxins, but also by masked mycotoxin which are formed by conjugating mycotoxins to biopolymers2. The extent of adverse effects of mycotoxins on animals’ health mainly depends on the extent of exposure (dosage and period), type of mycotoxins, physiological and nutritional status as well as possible synergistic effects of other chemicals to which the animals are exposed2. Around 400 mycotoxins are known, but AFs, OTA, ZEA, FB and trichothecenes are mostly focused. The emerging mycotoxins, CPA and MPA are also seen in the animal feed which can cause substantial loss in the farming3.

Mycotoxins level in the animal feed
Kemin Customer Laboratory Services test mycotoxin levels in animal feed samples and raw materials regularly. An analysis of the results obtained over the past years showed that about 85% of the samples were contaminated with either single or multiple mycotoxins12 and approximately 45% samples had mycotoxin contamination beyond the safe limits set by European Food Safety Authority (EFSA). The most common mycotoxin present in the feed samples were AfB1, OTA, FB B1, zea, T-2, CPA and DON12,14. Another published report shows as high as 95% of the feed samples having mycotoxin contamination13. Of which, AfB1 and T-2 found to be the most prevalent with 42% and 40% above risk tolerance level, respectively13. The same report shows 75% of the samples had presence of OTA and out of that 8% of samples the levels were above the tolerance level12,13. Contamination with fumB1 and T-2 was found to be 17% and 57% respectively in this study.  It was also observed that 17.22 %, 30%, 35% and 13% of samples were found to be contaminated with a single mycotoxin, two mycotoxins, three mycotoxins and four mycotoxins, respectively13. Presence of multiple mycotoxins is a big concern because of their synergistic toxic effects11.

Need of broad-spectrum toxin binder
An ideal mycotoxin binder for animal feed application should have several qualities. First and foremost, it should have high binding efficacy against all the common mycotoxins. It needs to be noted that poultry GI system has different pH at different locations and the binding should be intact when the feed passes through the GI system. Secondly, it should not bind to essential nutrients present in the feed such as vitamins and minerals. This is very important as materials such as charcoal show high binding efficacy against nutrients. It is also important to note that the mycotoxin binder should not get digested/degraded while passing through the GI tract as it can lead to release of the bound mycotoxins.

TOXFIN™ 300
Kemin Agrifoods India launched Toxfin 300, a broad-spectrum toxin binder composed of hybrid nano-silicates (HNS), activated clays and organic acids. Toxfin 300 was developed and tested using biphasic in vitro assay in context to poultry with mycotoxins and vitamins. It was then further evaluated by conducting in vivo binding studies in broiler birds using mycotoxin excretion method. The biphasic in vitro assay involves adsorption at pH 3.0 simulating the pH of crop and desorption at pH 6.8, simulating the pH of intestine. Based on adsorption and desorption, net binding was calculated (Fig.1). 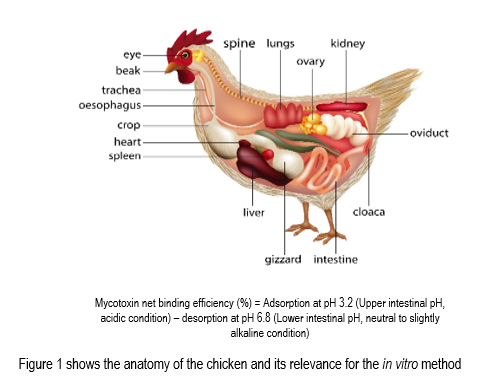 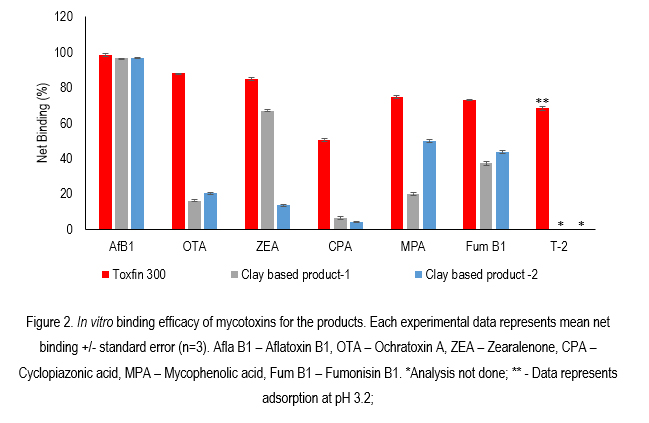 Toxfin 300 was then tested with vitamin B6 using the same procedure along with products of different actives and the results are shown in Figure 314. Among the tested products, Toxfin 300 showed the least binding. It was also observed that clay-based product exhibited high binding to vitamin B6. 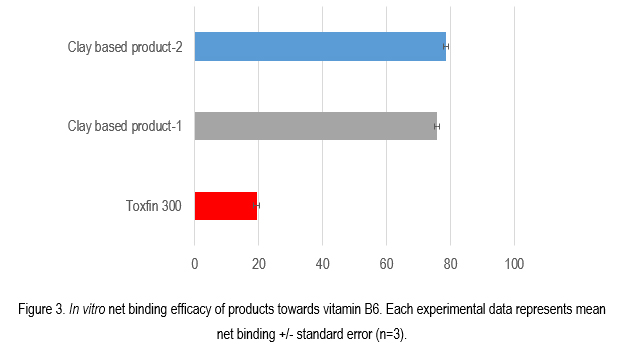 Toxfin 300 binding efficacy towards mycotoxins was also confirmed using in vivo excretion study14. In vivo excretion study consists of administering the feed contaminated with known amount of mycotoxins (OTA-100 ppb, zea-100 ppb and AfB1-50 ppb) admixed with the products of different actives after starving the broiler bird. Then the excreta were collected, pooled, dried and segregated according to the group receiving the respective actives and the results are shown in Figure 4. Toxfin 300 group showed higher excretion of all the mycotoxins among the tested products. All the products showed similar excretion efficacy for AfB1, whereas for OTA and zea, Toxfin 300 outperformed. 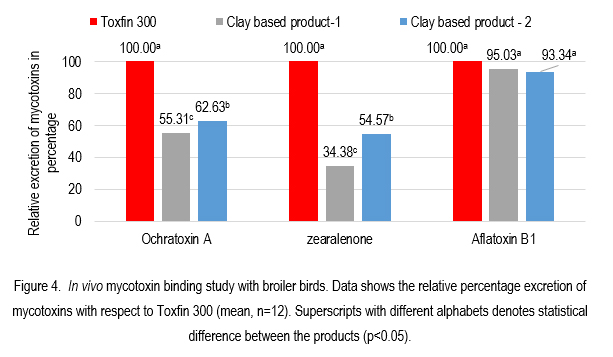 Conclusion:
It is well established now that mycotoxin contamination in animal feed is very common. The levels of contamination and number of mycotoxins present may vary from time to time. Mycotoxins have growth inhibiting effect on beneficial bacteria and thereby they can alter the gut microbiota, which plays a major role in maintaining the intestinal health and overall health of the bird. So, it is essential to use a broad spectrum, efficacious mycotoxin binder in the animal feed, even when low levels of mycotoxin contamination are detected.